Plot:
Adam (Tracy) is the wife of fellow lawyer Amanda (Hepburn). Adam is ordered to prosecute a case in which a man (Ewell) married to a woman named Doris (Holliday) who attempts to murder him after he has an affair with a client (Hagen). Amanda decides to defend Doris which sours her relationship with Adam.
Why it’s good:
This film actually tells us about the Tracy-Hepburn relationship, their admiration towards each other and the admiration the public had for them then.

And so everyone must watch at least one of these lovers' great films. THIS is the one to see. It’s better than the rest of their other comedies like 1952’s "Pat and Mike", which is actually an inspirational sports film. It is also neat and light, not like their heavy "Keeper of the Flame" (1942).
I, personally, really loved it. David Wayne is at a peak while singing that marvelous number "Farewell  Amanda". The courtroom backdrops are simply bizarre with all the courtroom fanatics. 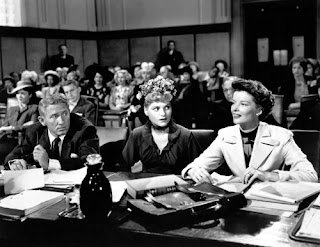 From Right: Katharine Hepburn, Judy Holliday and Spencer Tracy in one of the film’s court room scenes.


Parent’s guide:
There is a scene where they are massaging each other when Tracy and Hepburn break up in a fight involving hitting and punching. In addition, the first few scenes may be a little suspenseful and scary.


Trivia:
Spencer Tracy and Katharine Hepburn were impressed with the performance of Judy Holliday. Therefore, they casted her for "Born Yesterday" (1950). She took home an Oscar for that film.


If you like this…:
For more Tracy-Hepburn movies, the best bet is 1942’s "Woman of the Year", a comedy involving magazines and newspapers. "Pat and Mike" (1952), as I have stated, is the sports-comedy which is for children gifted in sports or athletics. "Desk Set" (1957) is a clumsy computerization film. "Keeper of the Flame" (1942) is too turgid and too melancholy. "State of the Union" (1948) is a talky White Huse comedy while "Without Love" (1945) is a suspense film. "Guess Who’s coming to Dinner" (1967) is a film of talk on racism and injustice, which won Hepburn an Oscar as the mother of a woman who marries Sidney Poiter.
Posted by CWSL at 05:16

Email ThisBlogThis!Share to TwitterShare to FacebookShare to Pinterest
Labels: 07 and up, Comedy, Katherine Hepburn