The Adventures of Robin Hood


Director:
Michael Curitz
Cast:
Errol Flynn, Olivia De Havilland, Basil Rathbone, Claude Rains, Patric Knowles, Eugene Pallete, Alan Hale and Ian Hunter
Ages:
7 and up
Plot:
King Richard (Hunter) has been captured by the crusades in a war. In Britain, his sneering brother John (Rains) becomes prince and Sir Guy of Gisbourne (Rathbone) follows John and has a maid named Marian (De Havilland). Sir Robin of Locksley (Flynn) hates John’s ideas and rebels against him together with Will Scarlett (Knowles), Frair Tuck (Pallette) and Little John (Hale). Soon, Robin falls in love with Marian as she and Sir Guy pass through with some gold money the rebels want to use to free King Richard. 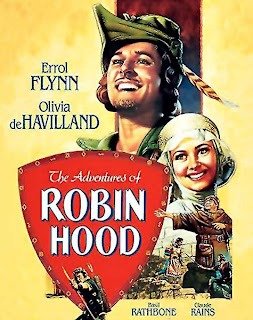 Why it’s good:
Because every cartoon about the great Robin Hood owes thanks to this film. Filmed in brilliant Technicolor is another reason this film is pleasurable.
The action sequences in this movie would interest the young ones who are into backyard swordplay with sticks and stones. Errol Flynn is at his most athletic youth when he does pleasurable stunts from arching to horse riding to stealing missions.
Basil Rathbone’s Sir Guy of Gisbourne is quite a good/bad Norman who follows John like how a dog follows its master. De Havilland’s character is a loyal outlaw who sides with Robin Hood two-thirds of the film.


Parent’s guide:
Action-violence is shown throughout the film. Rathbone is killed in the end of the film by Flynn. The outlaws assault the tax collectors’ coach with Marian in it. The outlaws feast on wine of which Marian calls revolting.


Trivia:
Maid Marian’s horse was actually Roy Rogers’ horse named Trigger.
If you like this…:
If you think your young backyard sword players are up for more, try 1922’s "Robin Hood", directed and starring Douglas Fairbanks and shot in two-component Technicolor. If you want other Flynn swashbucklers, find "Captain Blood" (1935) and "The Sea Hawk" (1940).
Posted by CWSL at 22:23

Email ThisBlogThis!Share to TwitterShare to FacebookShare to Pinterest
Labels: 07 and up, Action